An interview with me 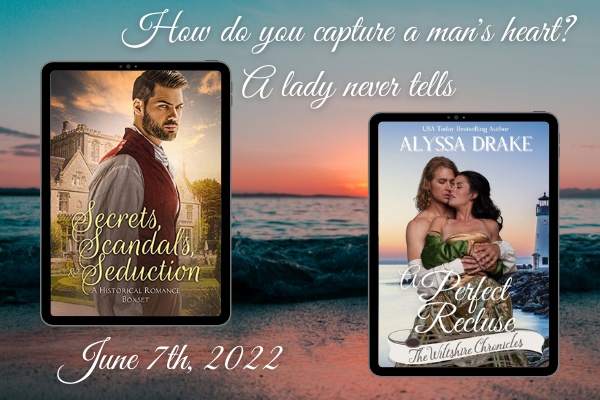 Experience romance through the eyes of the beast in this unique historical twist on a classic tale of love. A Perfect Recluse is one of sixteen historical romance tales included in the Secrets, Scandals, and Seduction boxed set. Pre-order for just 99 cents.

What do you find interesting about your main characters?

Both of my characters started as minor characters in a different story in this world. However, what makes them most unique, is that both of them have suffered from the vicious tongue of Society, and sought refuge by the ocean (although at different points in time). They are both grieving the loss of their sisters, who are assumed to have perished aboard a ship bound for America, and this connection breaks through Patrick’s self-imposed exile, allowing his heart to heal.

Where does the story take place and why did you choose this setting?

The story takes place at a lighthouse on the western coast of England. I chose this setting because the lighthouse is mentioned in previous stories in reference to Patrick. This location is also used as the port town from which their sisters sailed on the ill-fated ship.

Share a little about the story behind the story.

Patrick Flannery, my grumpy lighthouse keeper, was always supposed to receive his own story, but I hadn’t intended for the tale to take on such a melancholy tone. As I plotted out his story, the reason for his isolation developed into a psychosis that I hadn’t realized affected him (I love it when characters talk to you).

What is the theme or takeaway you want readers to think about?

Patrick faces a continual conflict between what he wants (Sarah) and what he deems is best for her (not him). Patrick’s growth and acceptance of his own value, is what convinces him to conquer this fear and proclaim his affection.

When did you know you wanted to be an author?

When I was a child, my mother’s best friend was a writer, and I was fascinated by her. The idea of creating worlds by stringing together simple words was magical. I wanted to do the same thing.

Today it’s a cat, but that’s because he’s curled up on my lap purring.

If you could travel to any spot in the world, where would it be?

When I first began this series, I chose Wiltshire as the fictional location because I really wanted to visit Stonehenge, which is the actual location of that mystical spot. And while magic does not play a role in this particular world, I love knowing that secret connection behind the town’s name.

What’s next in your writing?

I’m working on the second book in a time-travel trilogy set in Elizabethan England, which combines my love of historical romance and the paranormal. I also intend to publish Alana’s story (Patrick’s sister) next March, as her pirate experience needs to be told.

Oops, you forgot something.

The words you entered did not match the given text. Please try again.