An interview with Linda Rae Sande 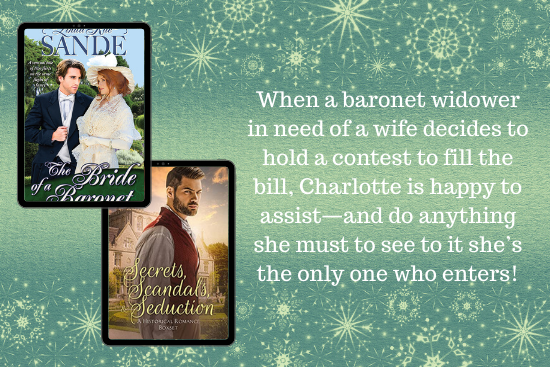 Get to know Linda Rae Sande, author of The Bride of a Baronet, one of sixteen exlusive historical romances available in Secrets, Scandals, and Seduction. Pre-order your copy today!

What do you find interesting about your main characters?

Sir Adam is a widower with a young daughter while Charlotte is a widow who never had children of her own. The two have a history—his wife was her best friend—but they were never on friendly terms with one another. The needs of the daughter require that they be civil with one another, and over time, their relationship changes. They’re smitten with one another but can’t admit it to themselves.

Where does the story take place and why did you choose this setting?

Cockington, Devonshire in 1840. I was looking for a village in England that was close to a larger town (in this case, Torquay) but far enough from London that travel there would be difficult. In order to keep the action in one place, it was important that it feel isolated and that the villagers thought they knew everyone’s business.

Share a little about the story behind the story.

After writing more than thirty-five novels, most taking place in Regency or early Victorian England, I realized I had never featured a baronet as a hero. I had also never featured a governess as a heroine. THE BRIDE OF A BARONET was the perfect vehicle in which to use those characters.

While researching something unrelated, I came across the mention of a bride contest, where a wealthy man had held a contest for unmarried women to compete for the honor of becoming his wife. He was too busy to court, and the contest was his way of arranging a marriage of what he thought would be convenient. As it turned out, he and his bride were quite happy.

What is the theme or takeaway you want readers to think about?

Unearthing secrets can lead to love! Our widower is understandably sad about having lost his wife, but by not learning more about what was happening in her life when she was alive, he was prevented from knowing what she wanted for him after her death.

When did you know you wanted to be an author?

In third grade, one of our assignments was to write about where we wanted to live when we grew up. I wrote that I intended to write books in London, Rome and Paris.

An Olde English sheepdog! I had two growing up, Miss Muffett VIII and Muffin MacDuff Paddlepaws.

If you could travel to any spot in the world, where would it be?

Greece! I’ve been three times and look forward to going back. I love using various islands as settings for books but I have yet to see most of the mainland.

For a place I haven’t yet been—Sicily. I wrote a book that took place there in 1816 and absolutely loved doing the research for it, so I’m finally going there in March followed by a quick trip to Rome. I threw a coin in the Trevi Fountain when I was there several years ago, so I have to go back.

What’s next in your writing?

I’m working on the next book in The Heirs of the Aristocracy series, THE HONOR OF AN HEIR, and a novella for a Christmas anthology set in the Soho Club.

Oops, you forgot something.

The words you entered did not match the given text. Please try again.